In 2015 we celebrate that Hotel de Vischpoorte exists for 10 years. Over the years, we have become very curious about the history of the building and its surroundings. That is why we contacted the “Working Group Building History Deventer” and they went to investigate for us. 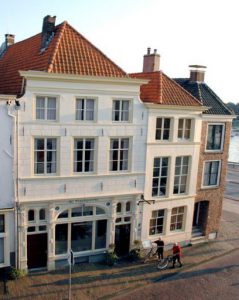 Current building Nieuwe Markt 40
This showed that the building has been inhabited since 1445, it used to be two houses, which were later joined together. At that time, many crafts were established, including a meat-cutting, goldsmith, baker and a merchant in sugar works. In the 90s it was a student house.

All residents from 1445 have been mapped. In the Second World War the building was bombed and in the following years it was mainly a building downfall.

The basement and the attic are always the most authentic. Below the hotel there is a cellar, containing a cesspool. The cellar consists of square columns and the ceiling consists of a cruciate ligament. The basement floor consists of scents. The attic has been converted into a hotel apartment.

Around 1230 a brick wall was built on the shore around Deventer, between 1300-1340 the second city wall with watchtowers was constructed.
and there was also the Binnen-Vispoort. In 1799, the gate served as a military prison. At the gate hung a whale vertebra, also in the gate a brick was processed with a verse of 12 lines, with above the city arms of Deventer. 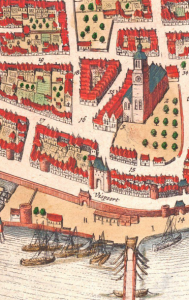 Historical map Blaeu with the plan and the old Fishpoorte 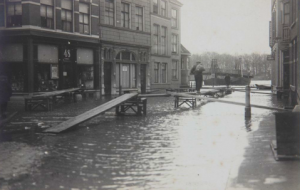 You can find the entire historical report of the hotel and deventer in the folder in your room.